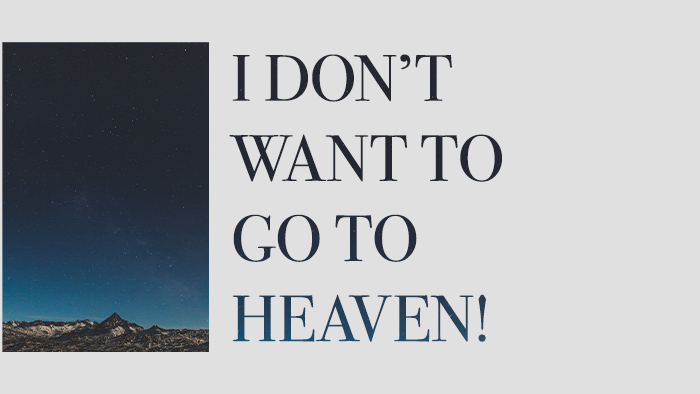 How could anyone not want to go to heaven? That was the question blaring in my mind as I sat across from a five year old girl that morning in Sunday school. When I was in middle school, I volunteered in the five year old Sunday school classroom. I don’t remember much about that class, but I do remember that day when the pastor’s daughter declared loudly and emphatically that she did not want to go to heaven.

When I asked her why, she said something about being bored and not liking having to go to church all the time. I tried talking her into the idea of liking heaven. But I found myself at a little bit of a loss to say anything more substantive than heaven was better than the alternative and surely it would be better than she thought. I don’t think I convinced her.

I continued to think about that conversation for a long time. Of course wanting to go to heaven was “the right answer,” but if I was honest with myself I had the same thought as that five year old: What if heaven was boring? There is so much I want to do here and now. For many of us I suspect this Far Side cartoon captures our expectations about heaven pretty well:

But maybe we haven’t been willing to admit to ourselves that we just aren’t that excited about heaven. I guess kids—and Gary Larson—are just most honest about that sort of stuff than a lot of adults.

It wasn’t until over a decade later that my imagination for “heaven” was rescued from the eneminc “…Wish I’d brought a magazine” caricature to the full-blood biblical vision of the New Heavens and New Earth. Two things happened. First, I was utterly captivated by N.T. Wright’s book Surprised by Hope. Wright helped me at last see what was in the Bible rather than just importing vague ideas I picked up from pop culture, classic art, and homespun theology. Second, I took a class on C.S. Lewis from professor Christopher Mitchell. I’d never met someone who had thought with such detail and clarity about the reality of the New Heavens and New Earth—or who lived with such contagious anticipation of them.

This Advent season,  we are going to take an imagination-baptising look at what the Bible promises about heaven. We’ll address questions like…

From the earliest days of the Christian church, Advent has been a season of waiting and preparation. It was a time to prepare for the celebration of Christmas, the celebration of Jesus’ first coming. Now kids make paper chains counting down the days until they can open the presents under the tree, and we mark the time with Advent calendars.

It is also a time to remember and look forward to Jesus’ promise that He would come again and make all things new, to unite heaven and earth. But what is heaven? And when we wait for heaven, just what exactly are we waiting for?

This Advent season let’s look together  at what the Bible says about heaven, about what we are waiting for.

Renewal Starts With Me

There is a question I cannot get out of my mind. I have been thinking…